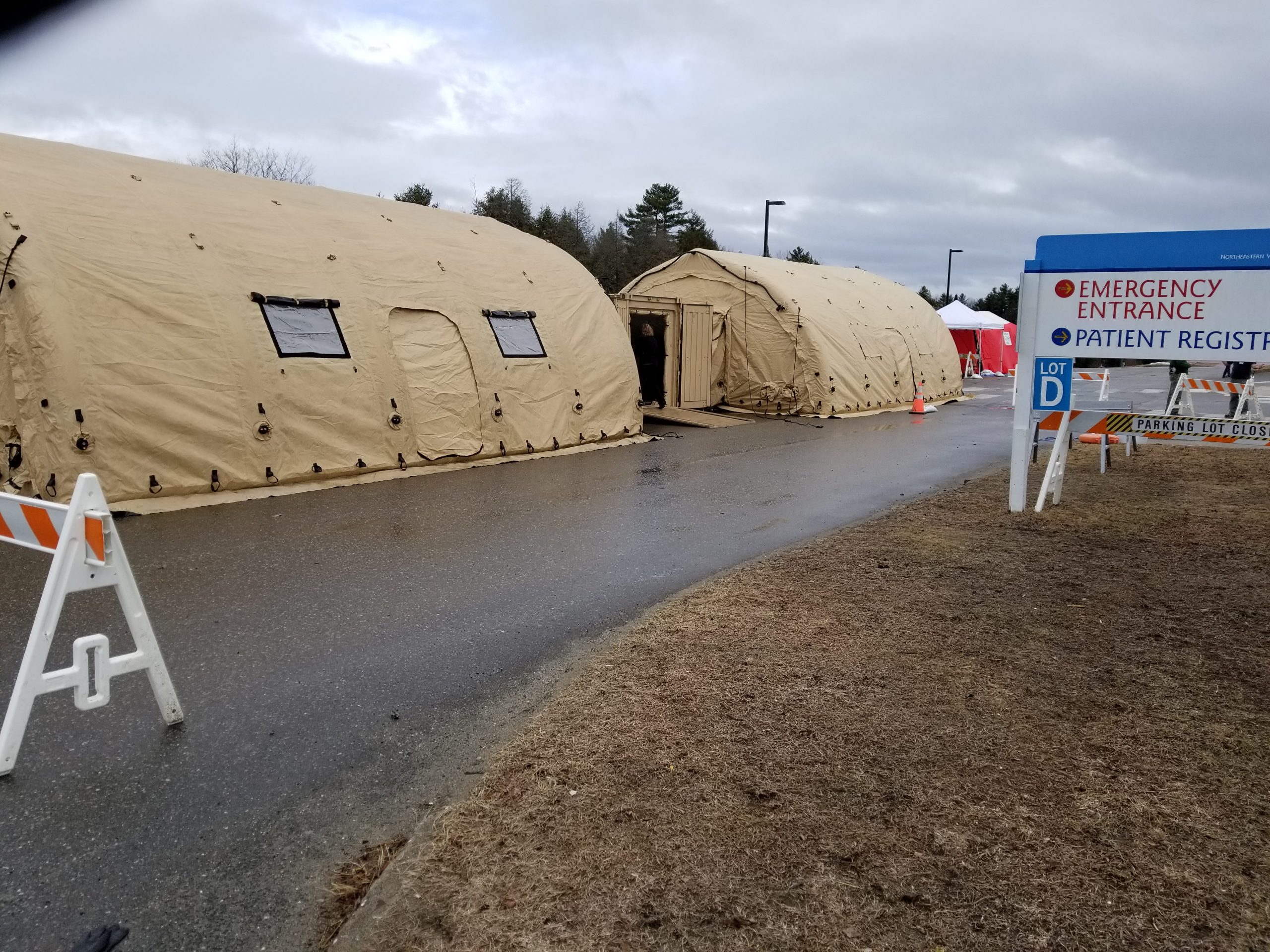 …raised from the dead.

The Tricon tent system is a rapidly deployable shelter developed years ago by St. Johnsbury manufacturer Mobile Medical International Corporation (MMIC) for the U.S. Department of Defense. But the system was later discontinued after the contract ended. All that was left of it was either sold-off or stored in containers sitting at the back of the Fairbanks Scales parking lot on Route 2.

“We had effectively killed this product line,” said MMIC Chief Executive Officer Jeff Paquet, whose company occupies one end of the massive Fairbanks facility. “It was a dead product line. We just wanted to get it out of the yard. And then all this happened.”

What happened was the coronavirus pandemic and the sudden, urgent need for more space at medical facilities to screen and treat patients. That led to a recent call from Vermont Emergency Management to MMIC.

“The state of Vermont had reached out to us on Saturday asking if we would provide the tent to the hospital so that’s what we’re doing,” said Paquet on Thursday. “We’re just trying to do the best thing for the hospital and the community.”

The Tricon tent system is more than just a tent.

“It’s two large tents that are completely outfitted with lighting and electrical and environmental controls and HEPA filtration so that you can basically – in a matter of a very short period of time – set up a triage field hospital,” said Paquet.

The 600 square foot tents were transported from MMIC to the hospital using equipment and personnel provided by local concrete company Calco, Inc. They are set-up in the parking lot next to the NVRH Emergency Room.

One tent will be used for staff and medical equipment and the other will be used by NVRH to triage patients that are having respiratory issues.

“Patients with respiratory symptoms will be screened and treated in the tent, then either released to convalesce at home or be admitted to the hospital if needed,” said NVRH Public Information officer Laurel Ruggles on Thursday. “This will allow NVRH to keep people who are ill – or potentially ill with COVID-19 – separate from people with other emergency medical needs.”

The tents effectively expand the emergency department at NVRH so critical care can be provided even if there is a sudden COVID-19 medical surge.

“It’s great to have a local partner like MMIC, just down the road, who can provide this solution for us,” said NVRH Chief Executive Officer Shawn Tester.

Mobile Medical is still running its core business – operating temporary medical facilities built on trailers at hospitals around the country.

But Pauquet says the recent developments have brought the Tricon tent system a long way from the time when no one seemed to want it. Now it appears Tricon may just have been a little ahead of its time.

“Fast forward a decade and we have a pandemic on our hands and it would be nice if a few hospital workers could set these things up relatively easily and be in business,” said Paquet, who has been CEO of the MMIC since 2017. “Now we’re looking at the product line completely differently. We’re thinking, ‘Hmmm…Maybe we really should reanimate this line?’”

MMIC is doing all this despite dealing with the same stresses as all the other “essential business” that remain open though the pandemic – with many employees suddenly working from home and other efforts to prevent the spread of virus in the work place and the community. But Paquet says that’s just part of the gig – especially in times like these.

“I think everybody understands that when you signed-up to be in the health care business this is the stuff you signed-up for,” said Paquet. “It’s kind of like being a cop or a nurse or a firefighter. You have an obligation to help.”

In 2017, MSI (Mobile Surgery International) purchased three of our mobile medical facilities. These Mobile Surgical facilities are currently in Oaxaca City, Oaxaca, Mexico beginning an historic eradication campaign with the goal of providing 2,000 surgeries per year for children suffering with untreated cleft lip and cleft palate facial deformities.  For more information on MSI […]

A Message to our Customers & Partners from Jeffrey Paquet, CEO

As the novel Coronavirus (SARS-CoV-2) and the disease it causes (COVID-19) continues to spread, I want to assure you that mmic® Medical Systems is taking all necessary precautions to ensure the safety of our employees, their families, our customers and our community.   Our company’s management team is actively monitoring the national COVID-19 outbreak […]